1Feed v0.2.1 is a fairly minor release, mainly bringing some improvements to the onboarding process (the screen that you see after signing up).

Even though this release is light on features, the exciting thing is that it’s the last step in preparing 1Feed for public sign-up! Starting in a few days, anyone will be able to sign up to use 1Feed — no need to wait on an invite list!

Once this happens, I’ll still consider 1Feed to be in a late testing phase. That said, it’s more than ready for daily use! However, I will hold off on doing a big ‘launch’ of 1Feed for a few months while I make it more stable, tailor 1Feed based on your feedback, and find more sustainable ways of attracting new users.

Anyway, onto the new stuff in this release!

Ever want to just view a website you’ve added to your 1Feed directly? Now you can! Just click on the feed’s name and you’ll get taken to their website in a new tab.

A new feature added in the last release was the ability to double-swipe quickly to go back to the start of a feed.

After using this feature for a while, I found the animation that happens when you do so to be fairly janky and also take up quite a large amount of time. For these reasons, double-swiping will now take you back to the start of the feed instantly — a small efficiency win for power users 😎 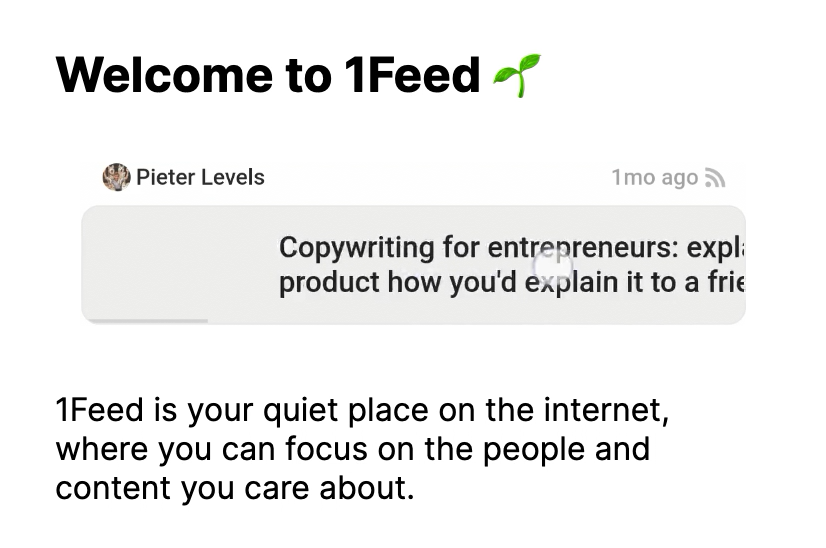 I’ve made some tweaks to the onboarding process to prepare for public sign-up. The most notable of these is a brand-new animation showing how to swipe feeds.

This is a requirement now that I won’t be in users’ DMs guiding you through every step of the process, as I was earlier in the testing process 😛

P.S. The screenshot above is just a static image to save you some network usage, but you can see a screen recording of the actual animated version here.

I’ve made a few small performance improvements, particularly in regards to the new thumbnails feature introduced in the last release. This will mean that thumbnails load faster and use less unnecessary network bandwidth.

As always, this release comes with various bug fixes. The most notable fix is for a bug that meant each time you logged in, you’d see the onboarding screen for a brief period of time (<1s). This has now been fixed, and you’ll see this fancy loading screen instead:

The other bug fix which you might notice is that now you can scroll anywhere on the settings page on desktop devices — previously, the scrollbar would show towards the centre of the screen rather than at the edge where it should be, and you could only scroll when your mouse was in the centre region of the screen.

That’s all for this release!

This release might not have had as many flashy features compared to last release, but I hope you enjoy the new improvements :)

And as I mentioned before, this release will be the last one before 1Feed opens up to public sign-ups — I’m excited about what’s next for 1Feed!