10 Practical Things You Can Do to Break Your Twitter Addiction

Find yourself spending too much time on Twitter? You’re not alone. Twitter is designed to keep you hooked.

But you can fight back! Here are 10 practical things that you can do to break your Twitter addiction.

This isn’t one of those dumb marketing articles with 3 irrelevant sections about “tHe HiStOrY oF tWiTtEr” — It’s packed with succinct, practical advice that you can implement right now!

1. Use the chronological timeline to remove suggested Tweets

This tweet is from someone I don’t follow — but Twitter still shows it to me, because they want me to spend more time in their app.

However, we can turn off suggested Tweets like this by switching to “Latest Tweets” mode. This will still show retweets, but other than that, it will never show content from anyone you didn’t explicitly follow.

To turn this mode on, open Twitter and find the “✨” (sparkle) icon. The placement of this icon may depend on where you’re accessing Twitter from (web app, iOS app, Android app, desktop app), but you should be able to find it on the home page somewhere:

Click on that, then press “See latest Tweets instead”: 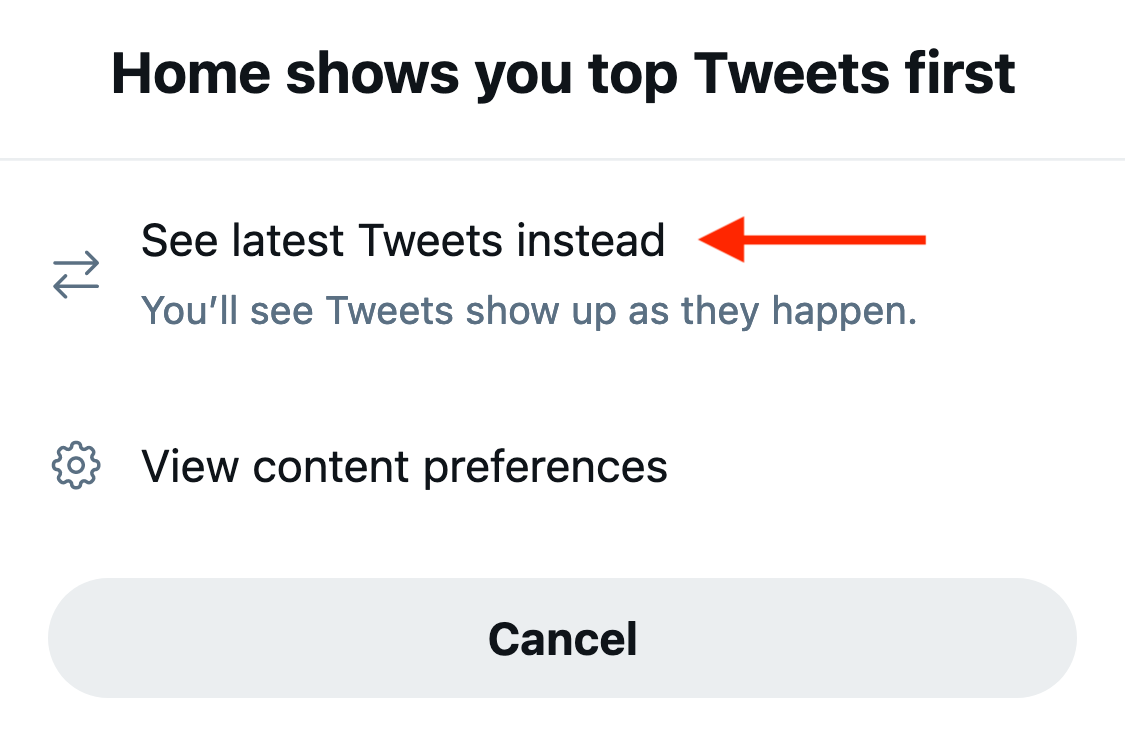 There we go! No more pesky content you never asked for!

2. Turn off retweets for noisy retweeters

On the topic of Tweets you never asked for, some people retweet things way too much!

The good news is, you can still follow them without being subjected to this digital noise.

Just go to their profile, tap the “…” icon, then press “Turn off retweets”. 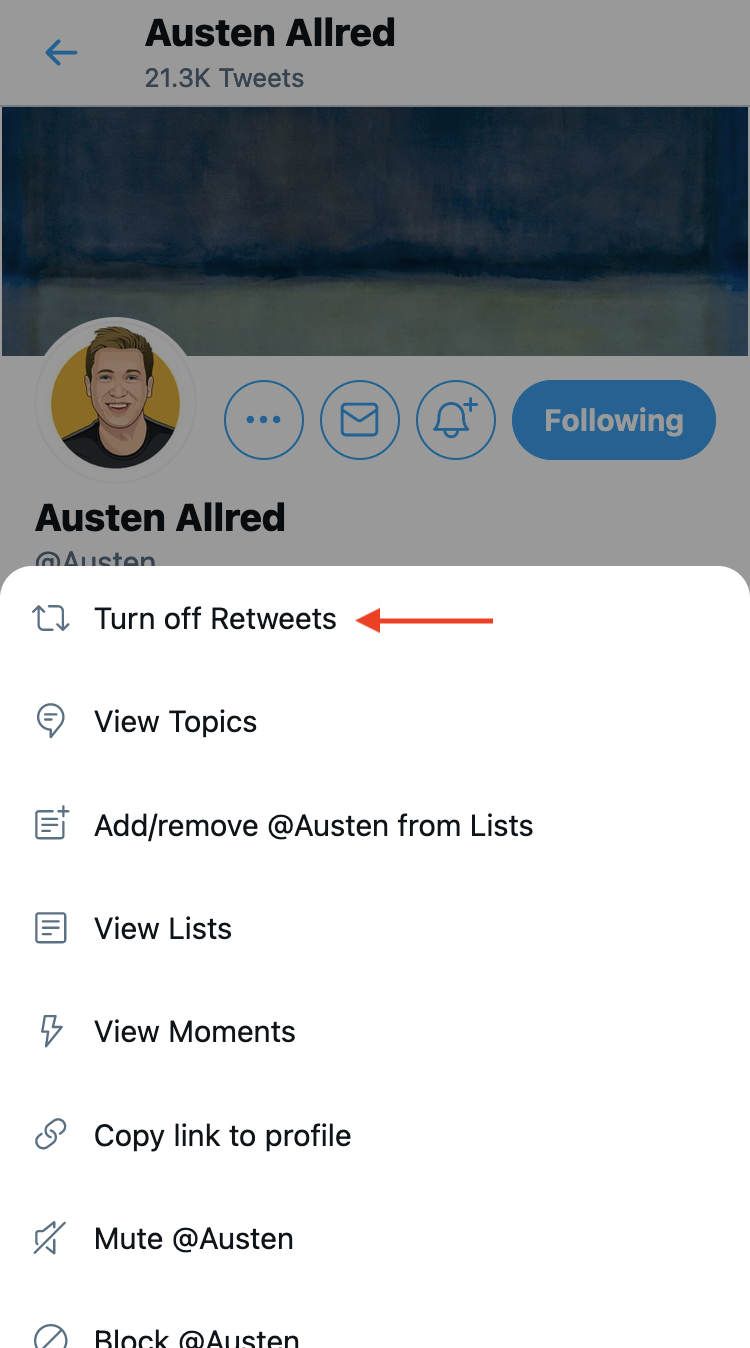 Unfortunately, there’s no way to globally turn off retweets for everyone at once. But you’ll probably find that the majority of the retweeted content you see comes from just a small group of people!

3. Set your Explore page to a foreign language

You know when you go to search something on Twitter, so you click that little “search” icon in the navigation bar and suddenly you’re assaulted with whatever the latest big news story is?

I personally found this very distracting, and every time I’d end up browsing the news instead of finding whatever I intended to search for (Twitter is good at designing for addiction!).

A really simple way to stop this from happening is to set your Explore country to somewhere with a foreign language, ideally with an alphabet that looks completely different from your native language.

For example, I’m from Australia and only speak English, so I chose Japan. Now my Explore page looks like this — I don’t understand any of it, so I can’t get distracted!

To change your country, just click that little Settings icon in the top right of the screenshot above. Then uncheck “show content in this location”, and select a random country with a foreign language.

That’s it! No more hours wasted when all you wanted to do was search something up.

If you use Twitter on your laptop, you’ll know that it looks really messy. Or you might have gotten so used to it that you no longer notice. But look at this abomination: 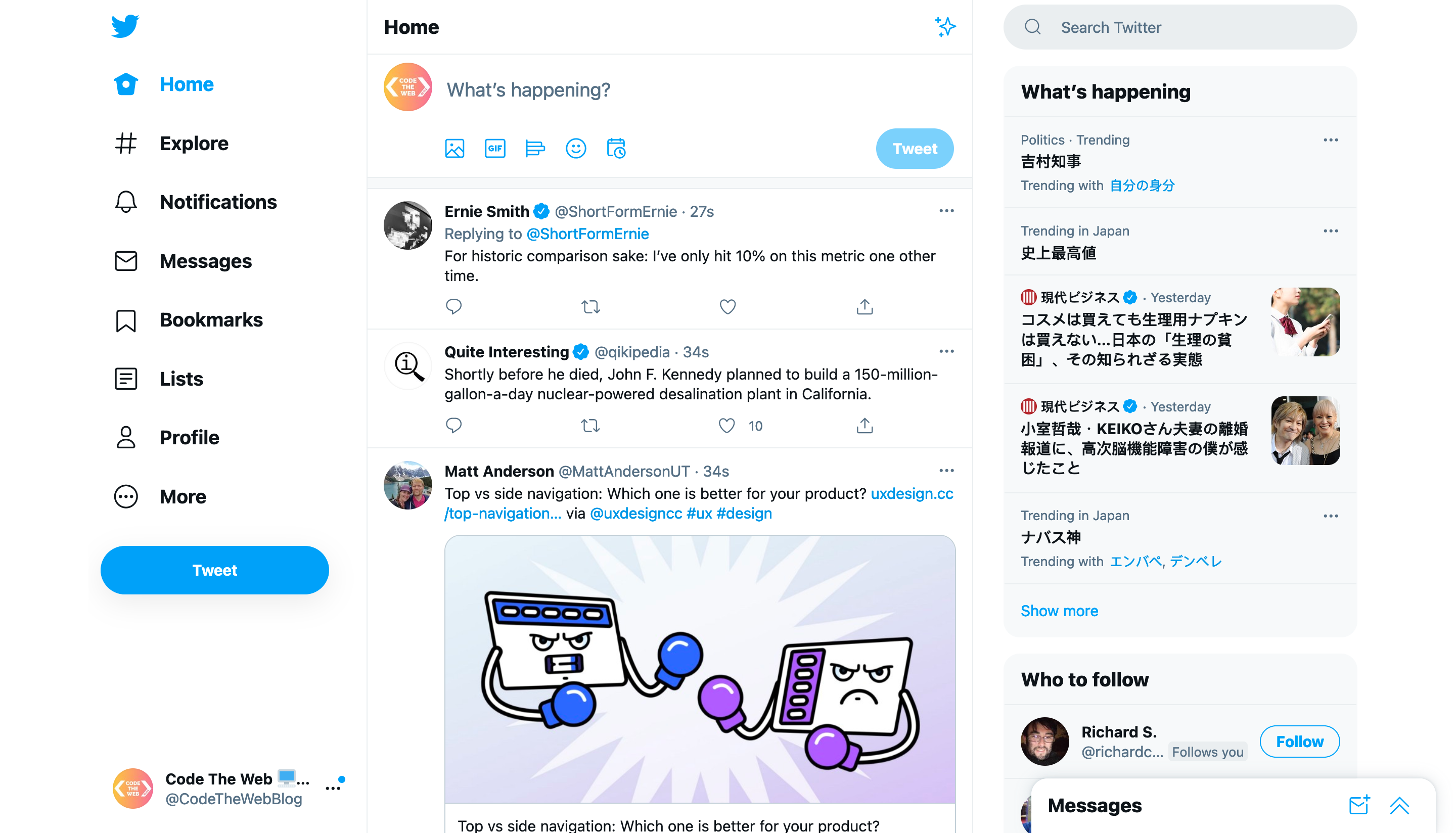 There’s a great browser extension by Bruno Lemos called Simplified Twitter. It tricks Twitter into thinking it’s running on a smaller device, removing a lot of the clutter on the sides. 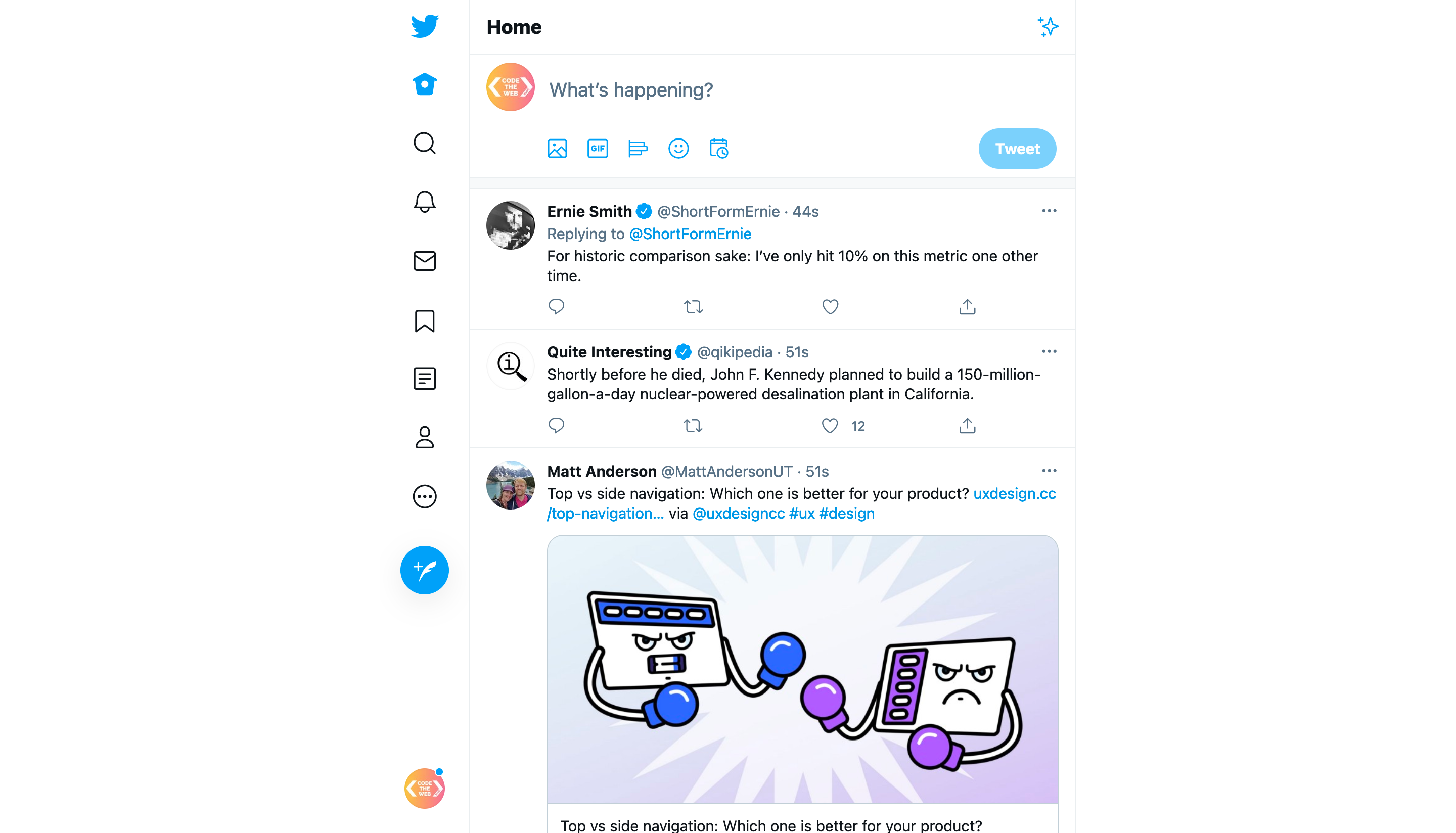 That’s so much better 😌

The extension works in literally any browser — Safari, Firefox, Edge, Chrome, Brave, you name it! You can install it here.

This may seem obvious, but if you’ve never played with your Twitter notification settings before, you’re probably finding the defaults a little noisy. Go to Settings -> Notifications and review each category to see if you really need to be notified — in most cases you don’t!

Personally, I’d recommend turning everything off except for Direct Messages, emergency notifications, and possibly mention notifications depending on how noisy your replies get.

Definitely make sure to turn off like and retweet notifications — these dopamine injections don’t add any value to your day, and only serve to keep you addicted!

6. Uninstall the phone app and use the web app instead

If you’re finding that none of the other methods have been working and you need to result to something a bit stronger, I highly recommend uninstalling the Twitter app from your phone and using it via the web version instead.

The main downside of this is that you won’t receive any notifications, including Direct Message notifications, but this could be a good thing depending on how hardcore you are going!

The web app has a few main benefits over the mobile version:

This is another method that you can use if the smaller tweaks aren’t working for you. Set a certain time that you will check Twitter, for example, 7pm every second day.

At these specified times, log into Twitter and check for the most important things you’ve missed. Then once you’re done, log out again. This will stop you from opening your Twitter timeline at random moments — by having to log in each time, you’ll only do it with intention, at your specified times.

There are two things you can do to make this method work even better:

8. Unfollow people and use lists instead

The Twitter timeline can often be a bit of a hot mess. It’s filled with various people you find interesting (or not), tweeting about completely different topics and different interests in your life.

This lets you browse Twitter with more intention, rather than just consuming content on whichever topic you happen to be shown.

The best way to do this is using Twitter Lists. It lets you create lots of smaller timelines with specific accounts only. To add someone to a list, tap the “…” icon on their profile, then press “Add/remove @username from Lists”. 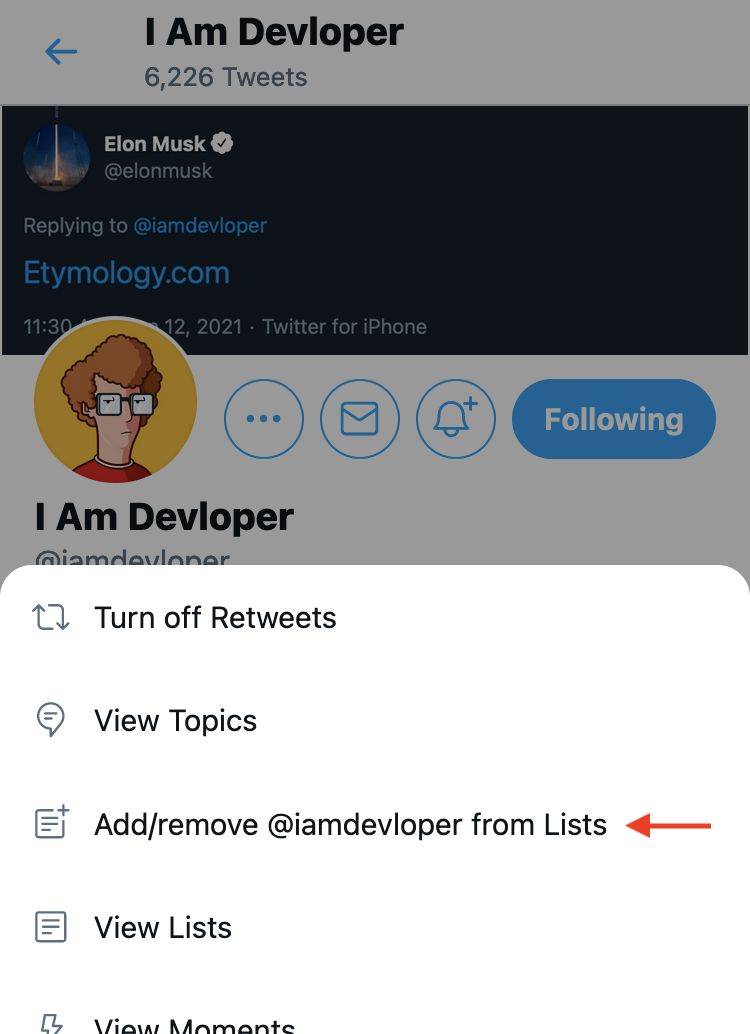 To access your lists, tap on your profile picture, then find the “Lists” button:

If you’re on a wider screen, you can just click on the Lists icon in the sidebar.

From here, you can go and view any of your lists! Then you can browse the most recent Tweets from accounts you’ve added, just like your main timeline:

Twitter lists also have a few other nice bonuses:

Now multiply this by the hundreds of people you follow — it’s no wonder you’re feeling a bit fatigued. The good news is, lots of these people you follow (particularly more well-known figures) maintain their own personal blogs!

These blog posts are perfect because they come less frequently (taking up less of your attention), but generally contain more valuable and nuanced content.

Most peoples’ personal sites can be found right on their Twitter profile:

So next time you’re about to follow someone, I encourage you — check out the link in their bio, and see if they maintain a personal blog. You’ll be surprised at some of the gems you find!

But how do you subscribe to someone’s personal blog?

There are a few ways to follow peoples’ personal blogs. In many cases, you’ll find they have a newsletter, in which case you can get their posts right in your inbox, or in an app like Stoop.

If they don’t have a newsletter, or you don’t want to clutter up your inbox, you can subscribe via their RSS feed. The majority of sites out there have one of these, and it can be used to keep track of when new articles are posted.

To subscribe to an RSS feed, you’ll need an RSS reader. There are many of these including Feedly, Fraidycat, Mailbrew, Inoreader, and 1Feed.

Maybe I’m biased, but I built 1Feed to solve my own content consumption problem, and it’s definitely done that, so I encourage you to give it a try! (or here’s a live demo)

If you think about it, there isn’t really anything that good about Twitter itself — the only things that keep me there are people’s content (which was made by people, not by Twitter) and the fact that I can build a small audience there.

If you have an audience on Twitter that you want to keep tweeting to, but don’t want to consume content on Twitter anymore, you can unfollow everybody — Anil Dash has a good guide on how to do this.

I recommend Fraidycat if you want a really compact glance at what’s going on, Mailbrew if you want Tweets in your inbox instead, and 1Feed if you want a mobile-optimized experience and a more minimalist look. The live demo includes a Twitter account, if you want to see what it’s like.

Hopefully these 10 tips will help you break your Twitter addiction, or spark some new ideas for how to get your digital habits under control.

I wrote them all from personal experience — at my worst, I used to spend hours every day on Twitter. Now, I spend maybe 15 minutes a week on there, and I can spend all that extra time on more intentional and useful things. Also, it feels so freeing no longer having that constant stream of random people around the world pounding my brain 24/7.

Now, all I do to keep up to date is just do a quick 3min check of my 1Feed every morning to see if I’ve missed anything important. I try to treat it more like a chore that I want to get done as quickly as possible rather than a source of entertainment and dopamine.

Thanks for reading, and hope you found it useful! 😊

And if you did find it useful, you can share this article with friends or family to help them break their Twitter addictions too.

Disclaimer: Yes, I mentioned 1Feed a few times in this article because I want you to check it out. But I also mentioned it because it’s really worked for me — and it’s my genuine hope that it’ll work for you too.

There are a million products I could be working on, but I’ve decided to work on this one, because I wanted to help others (and myself) break their addictions and build healthy digital habits instead.